In my Minimus Zero Road shoe review, I described how New Balance went back to the drawing board and completely revamped their Minimus lineup after collecting user and laboratory feedback about the first generation released last year. It’s especially telling that they did this with the Minimus Trail model, which proved to be one of the most popular shoes of 2011, and played a monumental role in introducing minimalism to the masses.

Or, to use another analogy: if you consider last season’s version an opening bid toward minimalism, think of this year’s Minimus Zero Trail as New Balance going all-in. It features several changes that purists will appreciate, and strips away every ounce of unnecessary construction to create an extremely lightweight, highly flexible trail runner that still provides decent protection for rugged or technical off-road conditions. Most – but maybe not all of - the upgrades from last year’s model are improvements, and with the finished product, New Balance pretty much sets a new standard for lightweight, high-performance minimalist trail shoes.

And if that isn’t enough to get you excited … you guessed it, we’re doing a giveaway! One male and one female winner will receive a pair of New Balance Minimus Zero Trail shoes to enjoy for his and herself – but in the meantime, let’s run through the standard review:

Here’s what will probably happen when you take the Minimus Zero Trail out of the box: the first thought that comes to mind will be, Holy cow are these things light. And when you put them on your feet, you’ll have nearly the same reaction. Above all the other improvements, that will almost certainly be the hallmark of the Minimus Zero Trail: the shoe is almost incredibly light.

At a mere 4.4 oz, it feels like there’s almost nothing on my feet – and coming from an experienced barefoot and minimalist runner, that’s saying something. The Minimus Zero Trails weigh less than any of Vibram’s FiveFingers (including the bare-bones SeeYa), Soft Star’s RunAmoc, and virtually any other standard bearer for light and minimal footwear.

As the revamped name of these models implies, New Balance corrected the primary drawback of last year’s edition and created a completely flat platform from heel to toe. Stack height is approximately 10mm, which places it about halfway in between Vibram’s Spyridon LS and Merrell’s Trail Gloves.

From the medial view you can also see the synthetic suede overlays that help keep the foot stabilized on the insole. Because the upper material is so thin, these overlays are crucial to prevent movement inside the shoe … 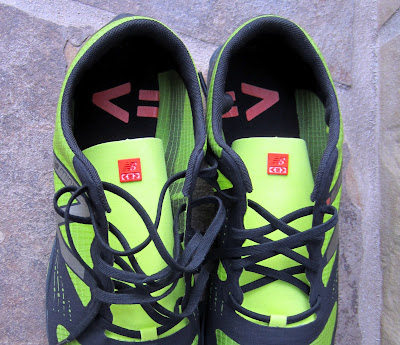 … as is the lined insole, which combines with a traditional tongue and lace system to keep the foot securely in place. Unlike my complaint about the Minimus Zero Road, I haven’t experienced any problems with forefoot movement in the Zero Trail, even on steep hills or highly technical terrain.

I was initially disappointed that New Balance replaced the upper material on last year’s Minimus Trail, which had a true slipper-like feel and was one of the most comfortable shoes I tested all year. The updated upper is remarkably thin, paper-like and translucent, constructed from a durable nylon that resists scratches and abrasions quite well. It seems a bit more permeable to dust and fine grit than the previous model, and feels coarser and less supple against my skin. Perhaps that’s why …

… the upper material gave me a nice little blister on the top of one toe after my first 8-miler. After a breaking-in period this issue resolved, and the rest of the Zero Trail’s interior is very comfortable for sockless use – however, I do stick with my custom of wearing socks for multi-hour runs in these.

One more note about the upper: have I mentioned that they’re thin? Consequently, the Minimus Zero Trail may be more of a warm-weather shoe than an all-season trainer, because your toes will indeed get cold in them, comparable to the poor thermoregulation of most FiveFingers.

For this year’s Minimus Zero Trail, New Balance uses a new Vibram T-Lite outsole rubber (the green stuff) on top of a layer of proprietary ACTEVA midsole foam (the black stuff) that is lighter and more compression-resistant than most other midsole materials commonly used – at least, it’s supposedly more compression-resistant, as you’ll see. One cool indicator of the midsole flexibility is that when I take the shoe off my foot, it often bends in half from heel to toe just like my FiveFingers do. 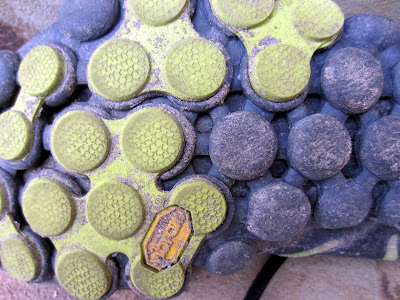 I’ve been fortunate to have my test pair for several months now, meaning I’ve racked up well over 200 miles on my Minimus Zero Trails. To my eye, it seems that the ACTEVA material has deformed slightly underneath the higher density green pods at impact areas. Of course, minimalist runners don’t expect much in the way of structure anyway, but the wear pattern thus far suggests that overall durability may be slightly diminished compared to its predecessor. 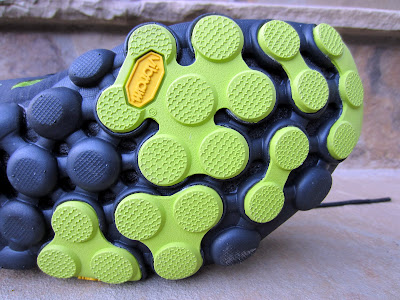 Placement of the outsole rubber was designed after reviewing wear patterns of from the previous model. The new outsole is even more deeply lugged than the prior version, which was already very aggressive and grippy in practically all conditions, and I’ve really had no problems with traction anywhere, especially on wet rocks or mud. However, spacing of the lugs is so wide that there is room for smaller pointy rocks to jut between them – think of gravel fire roads - so if you’re not accustomed to minimalist running yet, your feet could feel a bit of bruising on highly rocky or technical terrain. 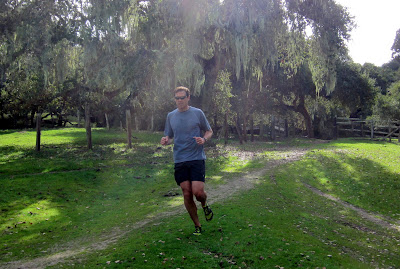 That speaks to a larger point that distinguishes the Minimus Zero Trail from its predecessor: it’s a no-apologies minimalist shoe for runners who are sure of their technique. If you’re not an experienced minimalist runner, start in small doses with this shoe just as you would with a pair of Vibrams. And if you’re still transitioning or still want some substance or structure from your shoes, the Minimus Zero Trail is probably more then you’re ready for.

So … are YOU ready for it? If so, let’s get our contest on. Same procedure for this one as for the road version: one male and one female winner will be chosen at random from the comments below. One entry for a plain ol’ comment, one extra for a Facebook or Twitter link, and a third for a blog link. Include links or URLs so I can verify, and let me know if you’re male or female if it’s not obvious from your username. Winners will be announced Saturday night, April 21.

If you’d rather not take your chance or wait that long, the New Balance Minimus Zero Trail retails for $109 from TravelCountry.com. Special thanks to New Balance for sponsoring this review and contest, and good luck to everyone! 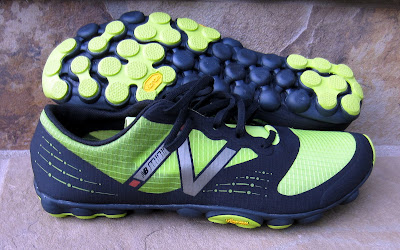 Check out the Running Life book for a collection of our most popular columns.