Muir Project Trailer; Running Water Book Review and Giveaway: Sure, the calendar says it’s winter, but it’s never a bad time to start thinking abut epic outdoor adventures for long sunny days ahead. On that note, today’s post offers two glimpses of the adventurous life – and in both cases, you have an opportunity to enjoy the stories in more detail for yourself at some point.

A couple of months ago I embedded a trailer called “Almost There” by The Muir Project, which was a teaser for an upcoming feature-length documentary about a group of artists, writers, musicians and filmmakers who spent 25 days hiking 230 miles on the John Muir Trail. The clip managed to capture both the chill vibe of going off the grid for an extended period of time, as well as the epic beauty of the trail.

Their film now has an official name: Mile … Mile and A Half, and is currently in the finishing stages of editing. The filmmakers are looking to secure final funding, and have completed an official trailer to generate increased awareness of the project. The trailer follows below, and you can contact The Muir Project website to contribute and help the project get completed.

“Mile … Mile and a Half Official Trailer” by The Muir Project (click to play):

“Whoever believes in me, as the Scripture has said, streams of living water will flow from within him."

This next outdoor adventure has a very similar premise to another I recently reviewed: it’s the story of a guy who runs across America.

However, the manner of Abraham Louis Clark’s journey is about as fundamentally different than Marshall Ulrich’s as you can imagine. Abe didn’t have a support staff or film crew to keep him company, and didn’t have an RV for shelter and comfort (a relative term in this case, but you get the idea) along the way.

Instead, Abe took the solo approach, and in 2010 became just the 15th person to run across America alone and unsupported. His only companion was an amazingly durable running stroller named Ruby, although he did utilize the support of others at various points along the way to replenish his food supplies and borrow an occasional warm bed or hot shower.

He also had a higher purpose in mind, as described in his book Running Water: his intent was to raise money for Living Water International to support its relief efforts in the earthquake-ravaged nation of Haiti. Abe describes himself as a “Christian-focused endurance adventure athlete”, whose mission is to take on epic adventures that will “inspire people to dream more, give more, and be more.” As an encore to his cross-country run, in 2011 Abe led a group on a 9,200-mile bicycle tour circling the lower 48 states that raised $30,000 for the creation of wells in Ethiopia.


By the end of his solo run, Abe raised nearly $90,000 for Living Water International, and Running Water is a detailed account of Abe’s remarkable journey from nervously dipping his feet in the Pacific Ocean to joyously splashing in the Atlantic roughly four months later. Along the way, he demonstrated a somewhat contradictory combination of extreme self-reliance and extensive community outreach.

On most nights, Abe slung his tent hammock anyplace he could find a secluded patch of real estate. His exploits in finding a warm dry place to sleep often border on the heartbreaking, such as when he was rousted in the middle of the night by a policeman so that he’d move his setup about 20 feet, or when he was turned away at the door of a church by a pastor who told him, “I’m sorry, I don’t know what to do for you.” (Seriously.) One of the most dramatic moments happens fairly early in the trek, when Abe is forced to dig himself a snow cave to wait out a long cold night in the Rockies.

However, in various small towns along the way Abe had set up host families who took him in for a night or two, and in those situations he shared his vision and objective with anyone who would listen. He booked guest spots on radio shows, spoke to school children, and visited church groups to spread the word about Living Water International and solicit donations. (If you’re wondering, whenever he was picked up off the road, he returned to the exact same spot before resuming his run – in many cases being driven in the opposite direction he needed to be heading.) 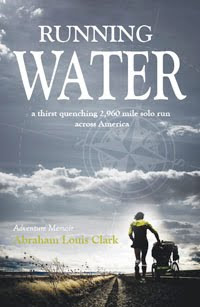 Running Water reads like a series of journal entries from nights spent along the road, which in essence it really is. It’s a self-published work, so you’ll find the occasional typo or odd grammatical arrangement – which will be a bigger issue to some (guilty!) than to others. I found that the story frequently gets too bogged down in details – what shoes he was wearing, how his stomach and bowels were functioning, what supplies he stocked up on - while too rarely describing the larger significance of the effort.

Living Water International is certainly a worthy organization, but Abe never really describes exactly how that organization or the plight of Haiti in particular weighed upon his heart. It’s unclear if he had some prior involvement with the organization, or some other personal experience that shaped his vision, and there’s very little discussion of the actual impact that water restoration will have on the impoverished community. I found myself wanting to sit in on one of his presentations to a church group so I could hear more details about the missionary aspect of his endeavor.

Another frustration I have is that the book is chock full of photos taken along the way, but they’re all black and white, and the quality is so bad at times that it’s hard to see what’s being described in the caption. Many of the scenes such as sweeping vistas, open landscapes, or characters he met would lend themselves very well to sharp color prints, but the shots in the book don’t do them nearly enough justice.

I guess my overall reaction is that Abe’s story deserves to be told in a bigger, grander way – but Running Water is still a fairly compelling account of a remarkable adventure that supported a noble cause. The book is available for $15 from Amazon.com, and Abe has graciously agreed to provide a signed copy to one reader of my website. Leave a comment below this post to enter, and I’ll announce the winner this Saturday night. Good luck to everybody, and thanks very much to Abe Louis Clark for sponsoring this contest.
Newer Post Older Post Home